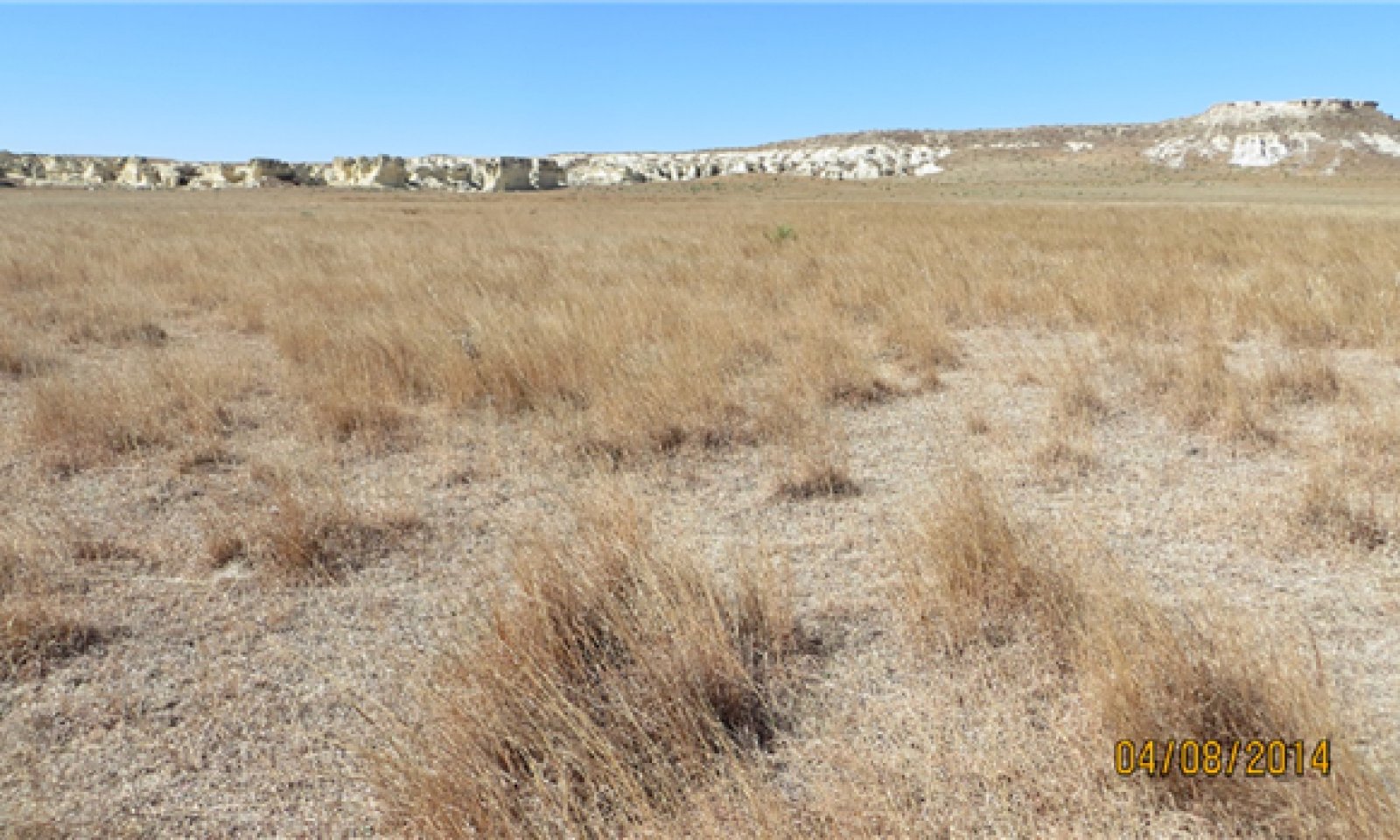 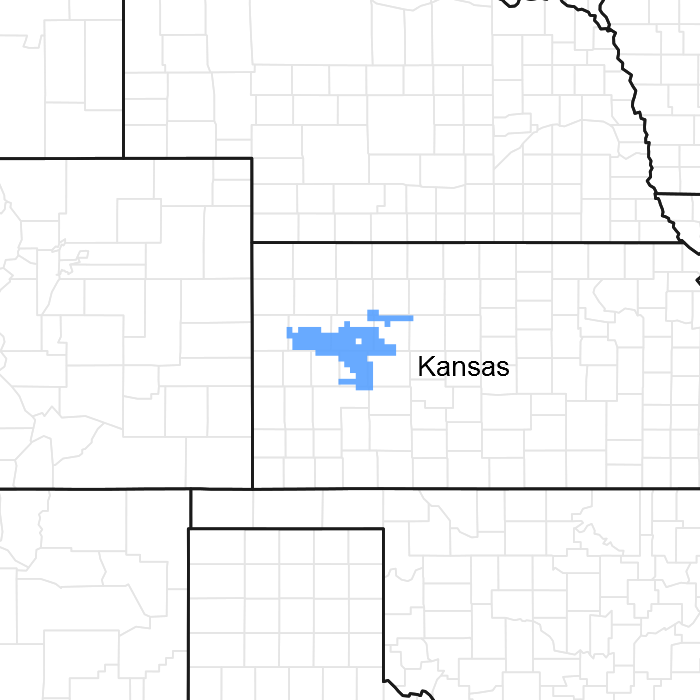 Major Land Resource Area (MLRA) 72--Central High Tableland. This area is in Kansas (54 percent), Nebraska (25 percent), and Colorado (21 percent). A very small part of the area is in Wyoming. The area makes up about 34,550 square miles (89,535 square kilometers). It includes the towns of Garden City, Goodland, and Colby, Kansas; Imperial, North Platte, Ogallala, and Sidney, Nebraska; and Holyoke and Wray, Colorado. Interstate 70 bisects the area, and Interstates 76 and 80 follow the south side of the South and North Platte Rivers, respectively. The Cimarron National Grasslands occur in the southwest corner of the MLRA.

The Chalk Fans ecological site name replaces Chalk Flats due to a change in landform position description usage. This site occurs on nearly level to gently sloping alluvial fans, fan aprons, and colluvial aprons below raw exposures of Niobrara Chalk formation. This site is dominated by calcareous slope alluvium and residuum weathered from chalk, shale and soft limestone. The majority of this site occurs in Kansas, adjacent to the Smoky Hill River, in Logan and Gove counties, with few acres in Lane and Trego counties. Badlands or Outcrop areas that are characterized by steep slopes and lack of vegetative cover are associated with this ecological site.

The Chalk Fans ecological site occurs on nearly level to gently sloping alluvial fans, fan aprons, and colluvial aprons below raw exposures of Niobrara Chalk formation. This site is dominated by calcareous slope alluvium and residuum weathered from chalk, shale and soft limestone. This site consists of moderately deep to deep, strongly calcareous soils, with silty or loamy surface layers and subsoils over soft chalky bedrock. This site receives water from adjacent sites on plains and rises. This site is subject to erosion by wind and water if the vegetative cover is reduced or absent by such things as overgrazing and fire events. Elevation for this site ranges from 2,470 to 3,350 feet. 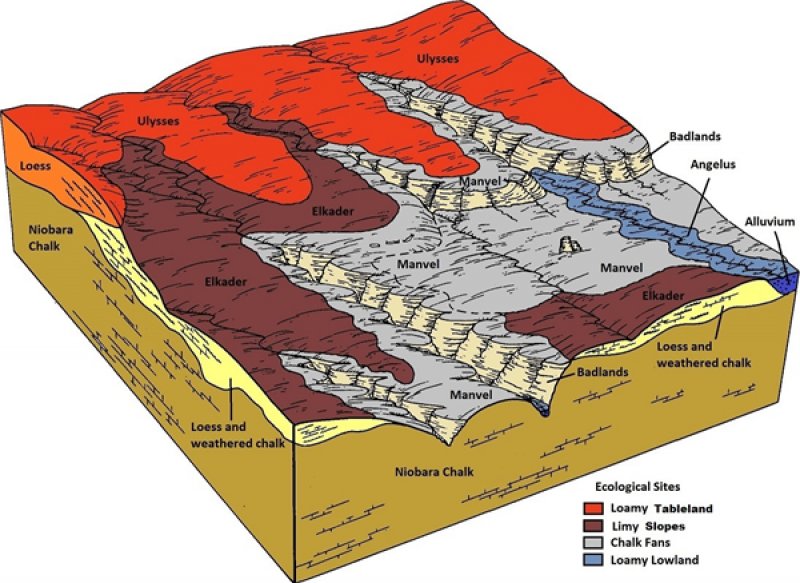 The climate moisture regime of this region is mostly semiarid. Although a 30 year average of 4 weather stations from 1981-2010 showed ranges of precipitation from 14-25 inches. Large daily and annual variations in temperature are common. Winters are cold because of frequent polar air masses moving into the area from the north from December into March. Summer temperatures are warm and usually prevail for about six months of the year. July typically has the most rainfall, and January is the driest. Most of the rainfall occurs as high-intensity, convective thunderstorms. The annual snowfall averages 16 to 35 inches. Drought occurs on an average of 3 times in a 30-year period (1981-2010) based on 4 climate stations.

The climate data listed in the tables below represent minimum and maximum averages and ranges for the climate stations located within the geographic boundaries of Chalk Fans. The dates referenced are from 1981-2010 (latest 30 year average). All weather data is supported by the National Oceanic and Atmospheric Administration (NOAA) 1981-2010 Climate Normals. For the average annual precipitation of individual climate station locations and additional climate data, access the National Water and Climate Center at http://www.wcc.nrcs.usda.gov

This site does not have a plant community that is influenced by water or water table from a wetland or stream.

There are water influencing features within the soil properties. According to field observations and an article by Linnell, 1961 "Where little bluestem was dominant, infiltration was considerably higher than where side-oats grama was dominant, primarily because of partially weathered chalk-rock fragments in the soil supporting little bluestem". 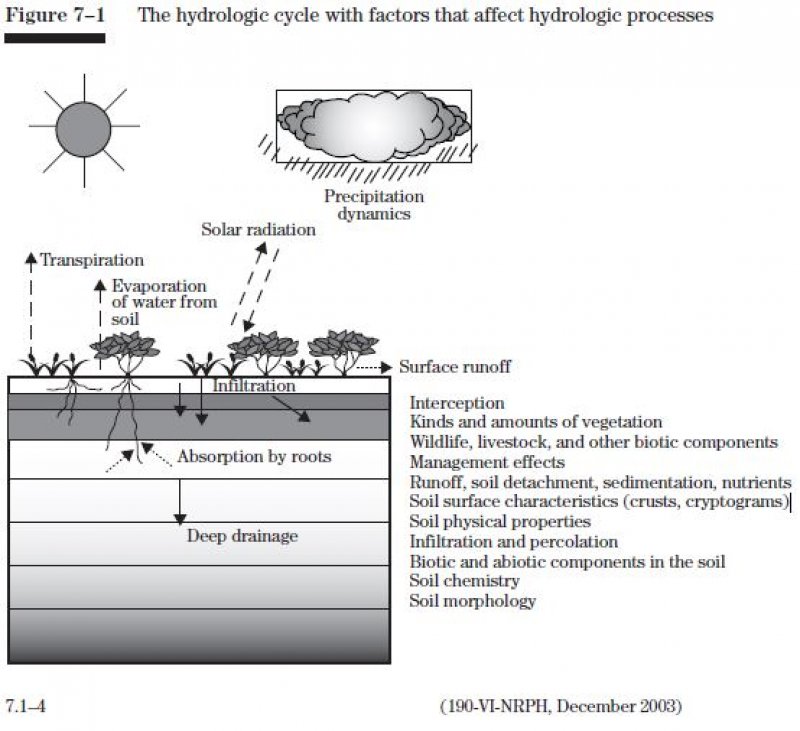 The Chalk Fans ecological site consists of moderately deep to very deep, well drained, moderately slow permeable soils on alluvial fans, and fan aprons. Slopes are nearly level to gently sloping. Runoff is negligible to low. These soils have a silty surface with weak structure and are generally 3 inches thick over Fine-silty subsoil.

The major soils that characterize this site are Manvel and Minnequa.

These attributes represent 0-40 inches in depth or to the first restrictive layer.

The plant communities for this site are dynamic due to the complex interaction of many ecological processes. The interpretive plant community for this site is the Reference Plant Community. The Reference Community has been determined by the study of rangeland relic areas, areas protected from excessive disturbance, areas under long term rotational grazing strategies, literature of plant communities from the early 1900s, and local expertise. Trends in plant community dynamics ranging from heavily grazed to lightly grazed areas, seasonal use pastures, and historical accounts have also been used.

This ecological site is made up of a Grassland State. The Grassland State is characterized by non-broken land (no tillage), tall, mid and short warm season grasses, bunchgrasses, sod-forming grasses, forbs, and shrubs.

This site developed with occasional fires as part of the ecological processes. Historically, it is believed that the fires were infrequent, randomly distributed, and started by lightning at various times throughout the season when thunderstorms were likely to occur. It is also believed that pre-European inhabitants may have used fire as a management tool for attracting herds of large migratory herbivores (bison, elk, deer, and pronghorn). The impact of fire over the past 100 years has been relatively insignificant due to the human control of wildfires and the lack of acceptance of prescribed fire as a management tool in the semi-arid, High Plains area.

The degree of herbivory (feeding on herbaceous plants) has a significant impact on the dynamics of the site. Historically, periodic grazing by herds of large migratory herbivores was a primary influence. Secondary influences of herbivory by species such as prairie dogs, grasshoppers, gophers, and root feeding organisms impacted the vegetation historically, and continue to this day.

The management of herbivory by humans through grazing of domestic livestock and/or manipulation of wildlife populations has been a major influence on the ecological dynamics of the site. This management coupled with the High Plains climate largely dictates the plant communities for the site.

Drought cycles were part of the natural range of variability within the site and have historically had a major impact upon the vegetation. The species composition changes according to the duration and severity of the drought cycle (Albertson and Weaver 1946).

The vegetation on this site is impacted by topography. The percent (steepness) and aspect of the slope interact with other ecological processes to further influence the vegetative dynamics of the site.

The majority of this site occurs in the valleys of Hackberry Creek in Gove county and the Smoky Hill River of Gove, Logan, Lane, and Trego counties. This site is preferred for grazing and is more productive and accessible than much of the surrounding area. The flatter, larger areas of this site are preferred by livestock, which can lead to grazing distribution problems. Water locations, salt placement, and other aids help distribute grazing. Other management techniques such as concentrated grazing and/or grazing systems also help distribute grazing more evenly.

The general response of this site to long term continuous grazing pressure is to gradually lose the vigor and reproductive potential of the tall and mid-grass species and shift the plant community toward mid and short grass species.

The tall and mid-grass species generally escape excessive grazing pressure on the less accessible areas of the rangeland. The tall and mid grasses maintained in these areas help provide a source for these species to repopulate the site after long periods of drought and/or overgrazing. The use of grazing management that includes needed distribution tools, proper stocking, and adequate recovery periods during the growing season, helps restore this site to its productive potential.

The following diagram illustrates pathways that the vegetation on this site may take from the Reference Plant Community as influencing ecological factors change. There may be other states or plant communities not shown in the diagram as well as noticeable variations within those illustrated and described in the following sections.

The Grassland State is supported by empirical data, historical data, local expertise, and photographs. This state is defined by two native plant communities that are a result of periodic fire, drought, and grazing. These events are part of the natural disturbance regime and climatic process. The Reference Plant Community consist of warm season sod and bunchgrasses, cool season sod forming grasses, forbs, and shrubs. The shortgrass-midgrass plant community is made up primarily of a warm season midgrass, short grasses, with decreasing amounts of forbs. 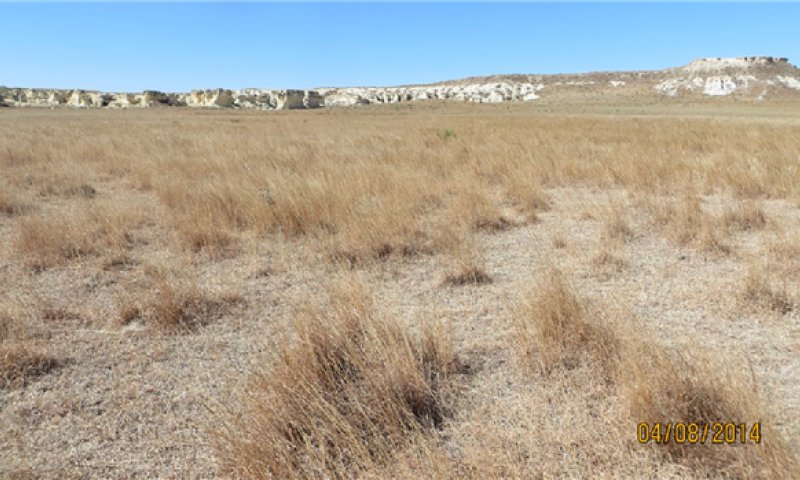 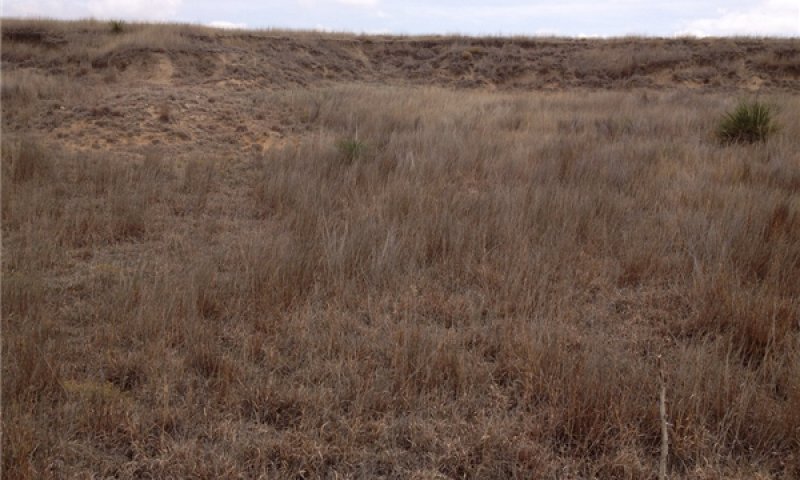 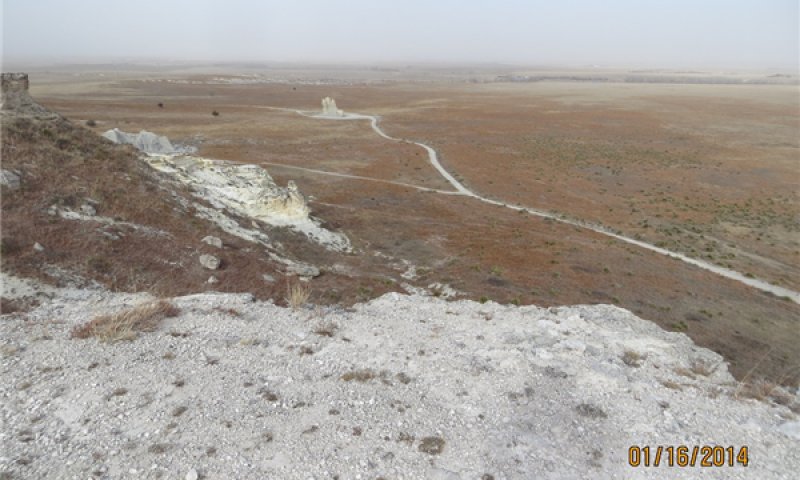 The Reference Community is supported by empirical data, historical data, local expertise, and photographs. The potential vegetation is a mixed grass prairie consisting of approximately 90 percent grasses and grass-like plants, 10 percent forbs, and a trace amount of woody plants. Little bluestem, sideoats grama, and big bluestem are the primary grasses in this community. Secondary species include blue grama, buffalograss, switchgrass, inland saltgrass, and western wheatgrass. Big bluestem and switchgrass are most likely to be present in the areas of this site located in a receiving position for rainfall events. This community has a small forb population. Shrubs will include fourwing saltbush and winterfat.

Little bluestem and sideoats are considered primary mid-grass species in this plant community.

This plant community is productive. Litter is uniformly distributed with very little movement off-site and natural plant mortality is very low. This community is resistant to many disturbances with the exception of extreme, long term, continuous grazing.

Total annual production ranges from 1,500 to 3,000 pounds of air-dried vegetation per acre per year and will average 2,200 pounds. These production figures are the fluctuations expected during favorable, normal, and unfavorable years due to the timing and amount of precipitation and temperature. Total annual production should not be confused with species productivity, which is annual production and variability by species throughout the extent of the community phase. 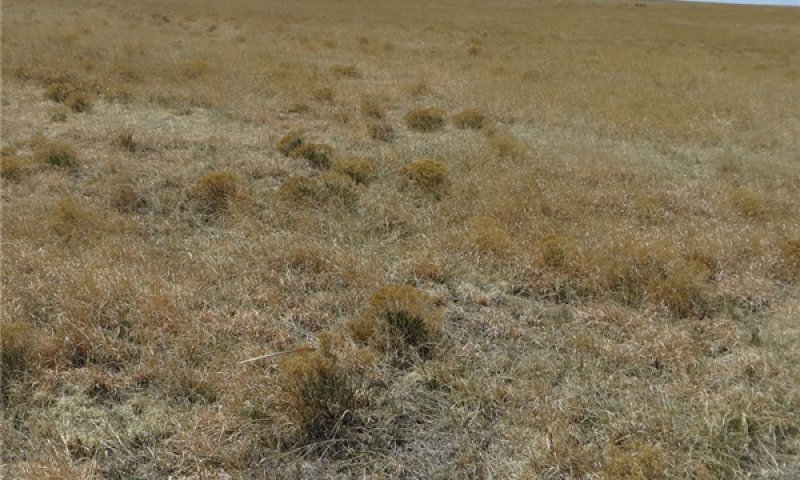 The potential vegetation is a warm season midgrass dominant prairie with warm season shortgrasses as a minor species. Total production is approximately 95 percent grasses and 5 percent forbs. Sideoats grama is the primary mid grass species and blue grama and buffalograss are the primary short grasses in this community. Inland saltgrass and western wheatgrass vary in amounts. Forb diversity has declined. Broom snakeweed and/or winterfat make up the shrub community.

The reduction of little bluestem and big bluestem and increase of warm season mid and short grasses has begun to alter the biotic integrity of this community. Water infiltration is reduced due to the sod nature of the buffalograss and blue grama. Runoff potential has increased in this plant community.

Management that includes heavy continuous grazing, inadequate rest and recovery, and no forage and animal balance will move the Reference Plant Community to a shortgrass and midgrass plant community.

No appreciable wood products are present on the site.

Site Development and Testing Plan.
Future work (for approved ESD) includes field visits to verify ecological site concepts with field staff. Field staff include but are not limited to project office leader, area soil scientist, state soil scientist, ecological site specialist, state rangeland conservationist, area rangeland management specialist, and local field personal. This site is of small extent and isolated to mainly Logan and Gove county Kansas. Field visits are to be determined by spatial extent of the site as well as personal knowledge of the site. Activity during field visits will include but are not limited to identifying the soil, landform, plant community, and verifying existing site concepts.

USDA Handbook 296, LRR and MLRA of the U.S., the Caribbean, and the Pacific Basin

Those involved with the development of this ecological site description include the entire MLRA72 technical team. Due to the small geographical extent of this site, specific individual contributions include: Roger Tacha, Ted Houser, and Tom Cochran.