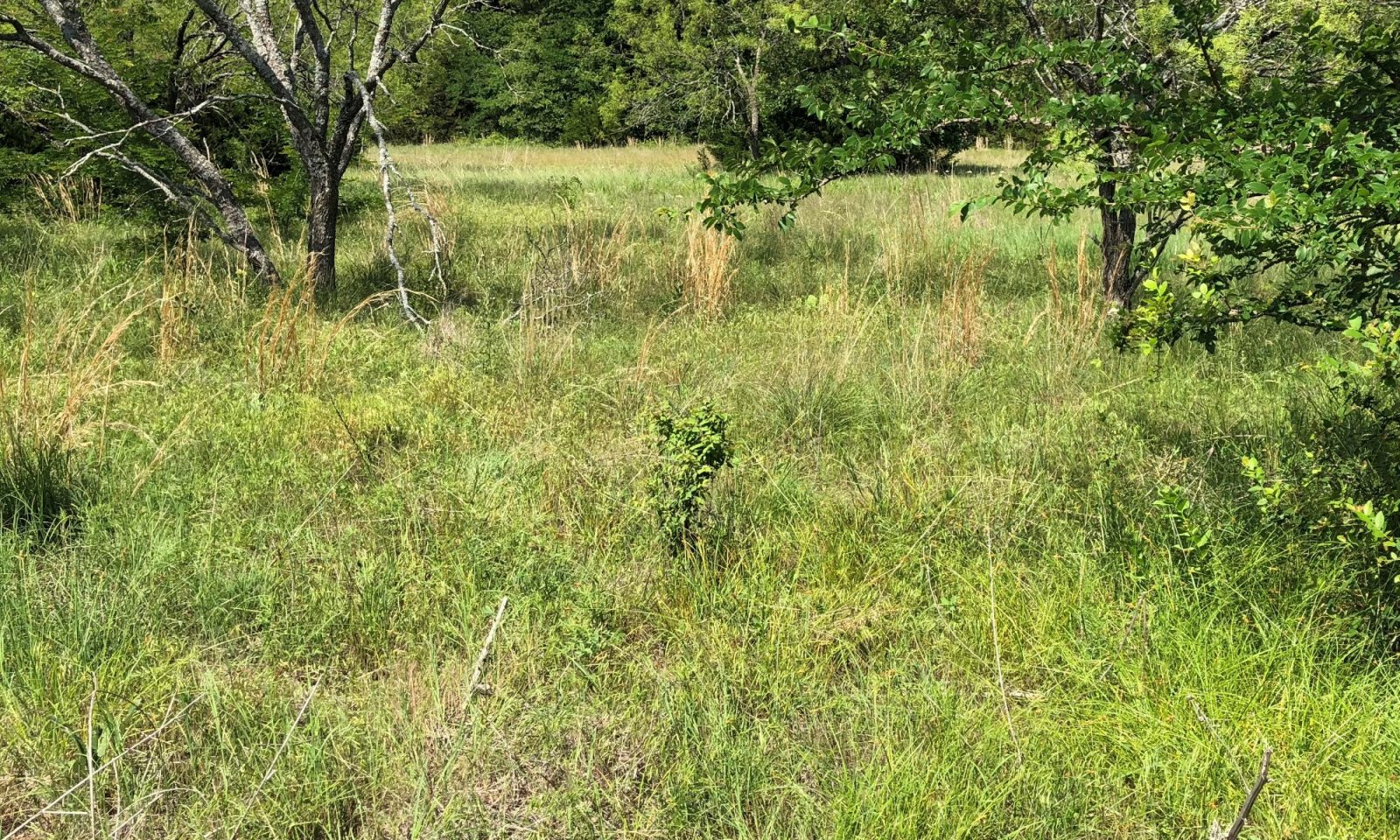 Provisional. A provisional ecological site description has undergone quality control and quality assurance review. It contains a working state and transition model and enough information to identify the ecological site. 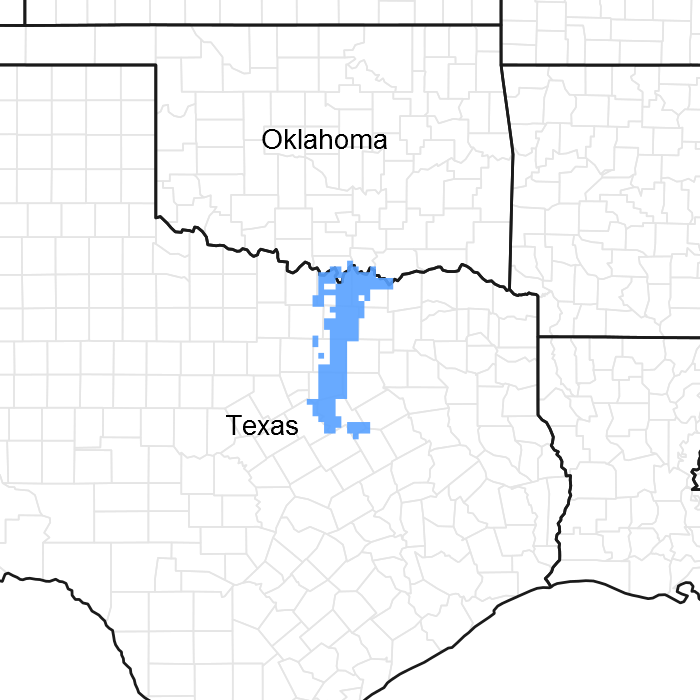 MLRA 84C is characterized by ridges, hillsides and valleys underlain by interbedded sandstone and shales of Cretaceous age. Most soils support oak savannah vegetation, however much of the area has been subject to fragmentation and urban sprawl.

These sites occur over sandy loam to clay loam soils with dense clay subsoils (claypans). The reference vegetation includes a mixture of midgrasses and tallgrasses with various forbs and legumes. Under reference conditions, woody species are limited by periodic fire or other brush management. Many of these sites have been cultivated in the past and are now planted back to introduced forage species. These sites are very vulnerable to mesquite invasion.

This site occurs on treads of stream terraces and on base slopes of hillslopes in the East Cross Timbers MLRA. This site is transitory between a water distributing and a water receiving site.

The average relative humidity in mid-afternoon is about 60 percent. Humidity is higher at night, and the average at dawn is about 80 percent. The sun shines 75 percent of the time possible during the summer and 50 percent in winter. The prevailing wind direction is from the south and highest windspeeds occur during the spring months.

These sites are in water shedding upland positions. However, they may also receive some run-on water from adjacent sites. The dense clay subsoils may limit water infiltration. The presence of adequate ground cover and deep-rooted tallgrass species can help facilitate water infiltration into the soil profile. 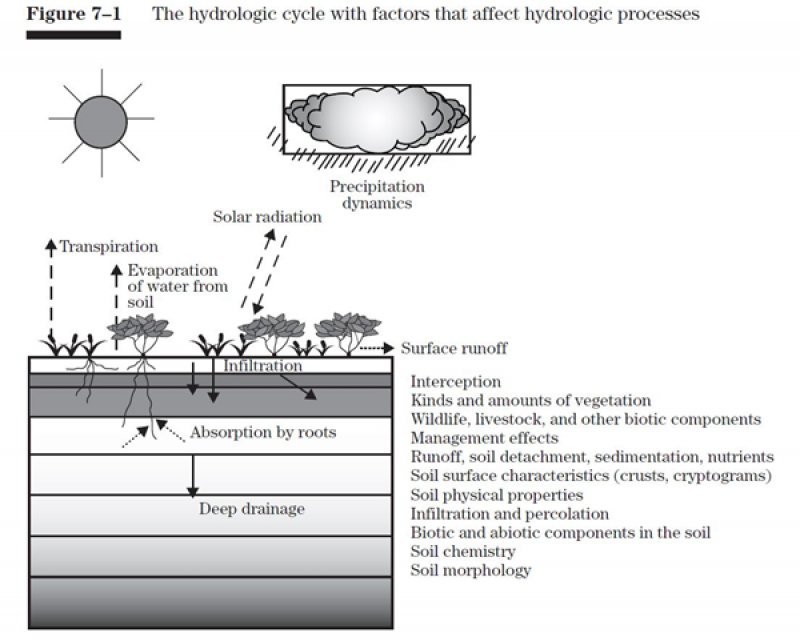 Representative soil components for this ecological site include: Crockett, Hassee, Mabank, and Navo

The site is characterized by deep soils with a loamy surface and hard setting clayey subsoil.

On a soils map, map units are representations of the major soil series component(s) and named accordingly. Each map unit is spatially represented on a digital soils map as polygons of different shapes and sizes. Within these map units, there are often minor soil series components included. These minor components are soils that occur within a map unit polygon but are of small extent (15 percent or less of the mapunit area). However, it is difficult to separate these minor soils spatially due to the scale of soil mapping. Ecological sites are correlated at the component level of the soil survey. Therefore, a single map unit may contain multiple Ecological Sites just as it may contain multiple soil components. This is important to understand when investigating soils and Ecological Sites. A soil survey map unit may be correlated to a single Ecological Site based on the major component; however, there may be inclusional areas of additional Ecological Sites which are correlated to the minor components of that particular soil map unit.

Like many sites across the Great Plains, changes in disturbance initiated by permanent settlements has had a profound impact on the ecological dynamics of the Claypan ecological site. Historically, the site was influenced by periodic fires during all seasons of growth. These fires were often the result of dry lightning strikes or anthropogenic fires set by Native Americans. The fire frequency during the period prior to settlement is estimated between 2 to 5 years for the southern Great Plains. These frequent fires were often followed by grazing of migratory bison herds attracted to the new growth of grass. This led to a shifting mosaic between burned and grazed and unburned and ungrazed landscapes.

With the removal if fire and the introduction of conventional livestock fencing, the landscape began to change to more homogeneous vegetation patterns and altered plant communities. Gently sloping sites like the Claypan site were often broke out for crop production also. This led to a highly fragmented, highly disturbed landscape we see today across much of MLRA 84C. 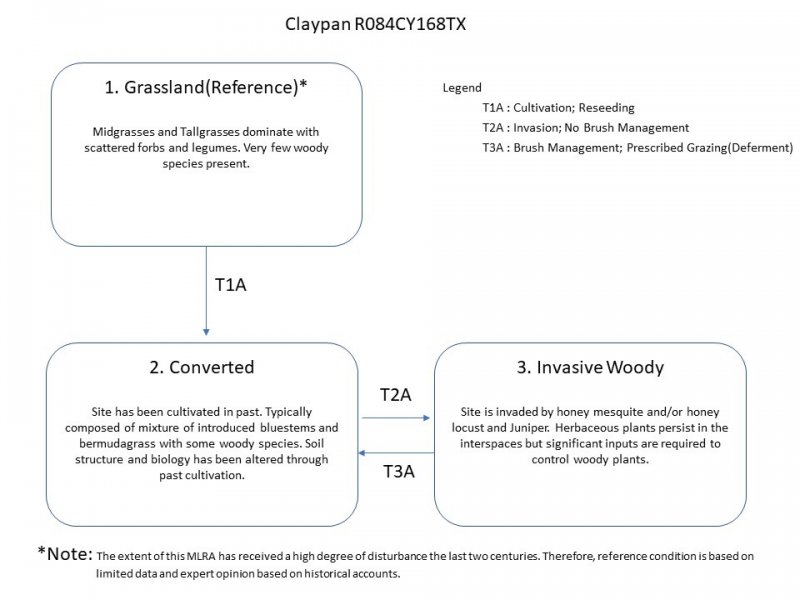 This is the reference state for the Claypan ecological site. It represents the historic range of variability in the plant communities with the periodic disturbance of fire and grazing. It is dominated by herbaceous plants with few woody species. Dominant grasses include little bluestem, sideoats grama, big bluestem, Indiangrass, and switchgrass. Other grasses include dropseeds, silver bluestem, Texas cupgrass and Texas wintergrass. Forbs and legumes include englemann daisy, sunflowers, heath aster, yellow neptune, catclaw sensitive-briar and prairie clovers. Woody species are limited with periodic fires and include elms, hackberry, sumacs and plums. Mesquite is a prominent invader on these Claypan sites. The Claypan site is estimated to produce between 3,000 to 6,000 pounds of vegetative production per year in reference condition. Tallgrasses = Midgrasses Forbs Shrubs and Trees are a minor component of these sites.

This state represents a change in land use from rangeland to pastureland. The soil structure and biology has been altered and the site is dominated by introduced species. Management of introduced forages requires more inputs than native grasses. Careful consideration should be taken prior to planting to ensure the result meets the desired use. Ratings for forage yields can be found under the Non-irrigated Crop Yield section in Web Soil Survey. As with any fertility management program, current soil tests should be taken before planting and subsequent fertilization of introduced pastures. The most common forage species on these sites include bermudagrass and Old World bluestems(eg. King Ranch bluestem). Without brush management, woody species such as mesquite, juniper, elm, or honey locust may invade these sites. There may be opportunities to plant native grass species on these sites to restore the reference plant communities. The success of this type of restoration is highly variable and depends on the remaining soil resources and past management. This type of endeavor often requires site specific planning and evaluation. However, the species described in the reference state are a good resource for initial planning of any restoration project. 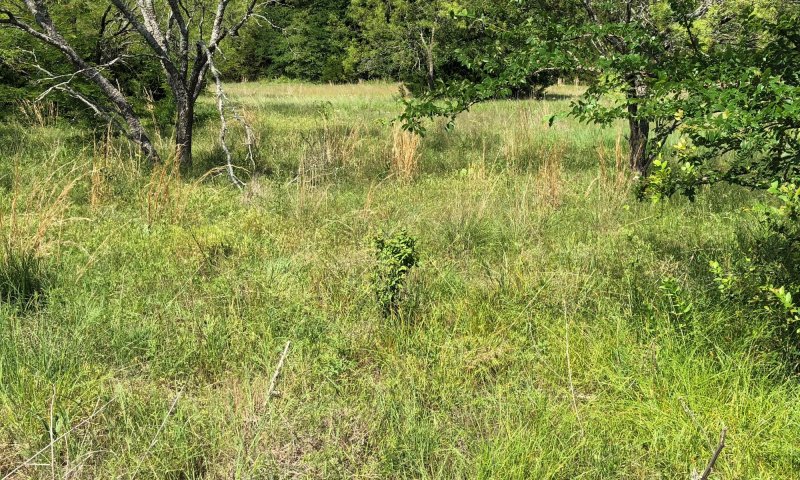 Domestic livestock and white-tail deer are the dominant grazers and browsers of the site. Various songbirds and small mammals may also find use of these claypan areas. As the site changes towards the Invasive Woody State, the quality of the habitat may improve for some species and decline for others. Management must be applied to maintain a vegetative state in optimum habitat quality for the desired animal species.

These sites occur on uplands and shed water to adjacent sites lower on the landscape. Some sites may also receive some run-on water. However, the clay subsoils slow infiltration and permeability. The presence of deep-rooted tallgrasses can help facilitate percolation of water into the soil profile. While these claypan sites can be a productive site, they may become quite droughty during dry periods as the clay subsoils tend to hold available water where it is not available for plant growth.

Future work, as described in a Project Plan, to validate the information in this Provisional Ecological Site Description is needed. This will include field activities to collect low-, medium-, and high-intensity sampling, soil correlations, and analysis of that data. Annual field reviews should be done by soil scientists and vegetation specialists. A final field review, peer review, and quality control and quality assurance reviews of the ESD will be needed to produce the final document. Annual reviews of the Project Plan are to be conducted by the Ecological Site Technical Team.