This ESG is found most commonly on plateaus or footslopes of mountatins on linear/linear slope shapes under 15% slopes at elevations between 4000 to 6500 ft.

The average annual precipitation in this MLRA is typically 20 to 65 inches but can range from 13 to 123 inches (176 to 2,471 millimeters). This ESG averages from 20 to 60 inches. It is lowest in the lower valleys and highest on the mountain peaks. The precipitation falls mainly from fall to spring, mostly as snow. Winter precipitation is from Pacific storms that are frontal in nature. The amount of precipitation decreases from west to east. Summers are typically warm and dry, but there are occasional thunderstorms. The average annual temperature is 27 to 61 degrees F (-3 to 16 degrees C). The frost-free period for this ESG is generally less than 100 days, and the freeze-free period averages 215 days and ranges from 85 to 350 days. The lowest annual temperatures and the shortest freeze-free periods occur in the mountains.

Soils in this ESG are typically frigid and xeric and influenced by volcanic ash and derived from colluvium or residuum from volcanic rocks. They are skeletal soils with gravelly to very gravelly sandy loam and loam textures, and lithic or paralithic contact between 20 to 60 inches deep.

The most typical soils represented include:

This ESG is characterized by the low slopes, shorter growing days, and plateau landforms. It is part of the Sierran mixed conifer habitat type and is an assemblage of conifer and hardwood species that forms a multilayered forest. Historically, burning and logging have caused wide variability in stand structure, resulting in both even-aged and uneven-aged stands. Virgin old-growth stands where fire has been excluded are often two-storied, with the overstory comprised of mixed conifer and the understory white fir and incense-cedar. Forested stands form closed, multilayered canopies with nearly 100 percent overlapping cover. When openings occur, shrubs are common in the understory. Closed canopy stand distribution is both extensive and patchy depending on scale, site, slope, soils, microclimate, and history.

Five conifers and one hardwood typify the mixed conifer forest white fir, Douglas-fir, ponderosa pine, sugar pine, incense-cedar, and California black oak. White fir tends to be the most ubiquitous species (though most often a minor overstory component) because it tolerates shade and has the ability to survive long periods of suppression in brush fields Douglas-fir dominates the species mix in the north, but is absent south of the Merced River. Ponderosa pine dominates at lower elevations and on south slopes. Jeffrey pine commonly replaces ponderosa pine at high elevations, on cold sites, or on ultramafic soils. Red fir is a minor associate at the highest elevations. Sugar pine is found throughout the mixed conifer type. Black oak is a minor, but widespread, component in mixed conifer stands. Though black oak does best on open sites, it is maintained under adverse conditions such as shade, ridge tops, and south slopes where conifers may regenerate in its shade. This ESG is primarily dominated by Jeffery pine, ponderosa, white fir, Douglas-fir, incense-cedar, sugar pine, snowbrush, greenleaf manzanita, Sierra chinkapin, western serviceberry, snowbrush ceonothus, and pinemat manzanita. 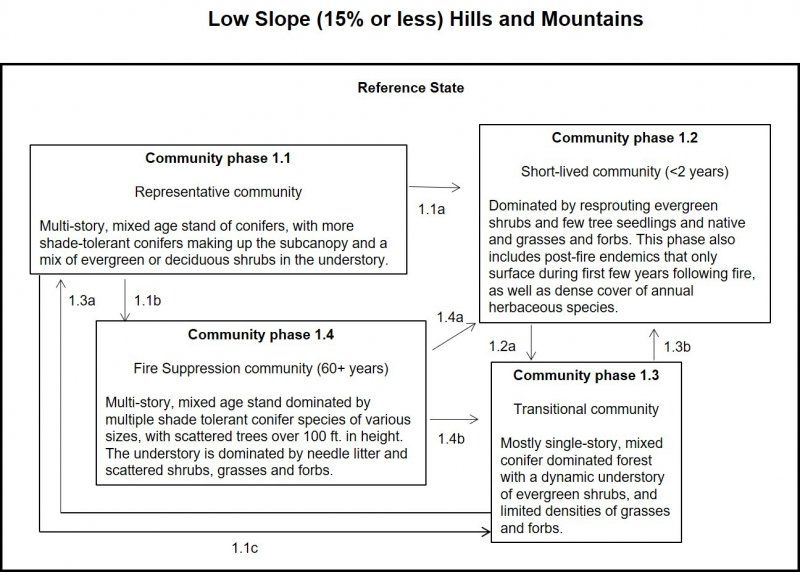 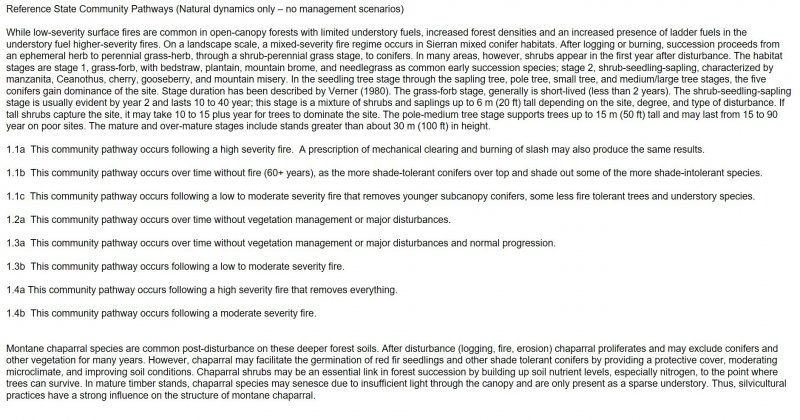